Currently in Europe, B. salamandrivorans has been detected in the wild in the Netherlands, Belgium, Germany and Spain. In 2018 Bsal was detected in a marbled newt (Triturus marmoratus) population in Northern Spain, over 1000 km from the nearest natural outbreak site.

Bsal infections in captive urodelans have been reported in the UK, Germany, the Netherlands and Spain. There are indications that the captive amphibian Bsal reservoir combined with amphibian movements act as vehicle for further Bsal introductions in naïve regions, which was most likely the case for the Northern Spain Bsal outbreak.

Recent (2020) Bsal outbreaks have been detected in Bavaria Germany, causing mortality and disease in fire salamanders and alpine newts.

As it continues to spread, this fungus poses an imminent threat to amphibians in other European countries as well. As a result, an early warning system has been conceptualized to enable a rapid response to further dissemination of this pathogen throughout Europe. 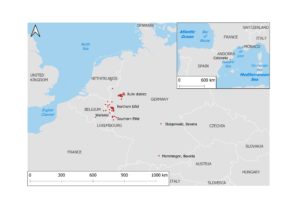 Current distribution of chytridiomycosis caused by Bsal (diagnosed with qPCR and confirmed by means of histology) in Europe.