In 2013, the novel fungus Batrachochytrium salamandrivorans (Bsal) was described, following the discovery of massive crashes of salamander populations in North-western Europe. Bsal is believed to have recently spilled over from Asian urodeles in the pet trade to European salamanders. This fungus has been shown to be highly pathogenic to most urodelan taxa naturally occurring in Europe and has been identified as a cause of mortality in wild salamander populations in three EU member States (the Netherlands, Belgium and Germany). Bsal was recently shown to be present also in captive urodeles in the United Kingdom, Germany, the Netherlands and Spain. However, the current distribution of Bsal in Europe is not yet known. In the Netherlands, where Bsal outbreaks were first described, the loss of individuals in a population of the fire salamander (Salamandra salamandra) over a 7-year period was estimated at 99,9%, with no signs of recovery so far. While the fire salamander is still common in other parts of the EU, similar population crashes in other urodelan species with small ranges and small population sizes are likely to significantly increase the extinction risk of these species through stochastic events. In order to stem the tide of amphibian population declines and prevent mass extinctions, the European Commission(EC) issued the tender ENV.B.3/SER/2016/0028, Mitigating a new infectious disease in salamanders to counteract the loss of European biodiversity). 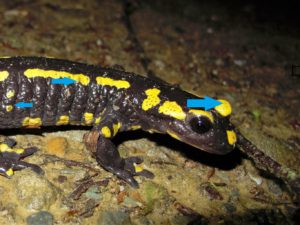